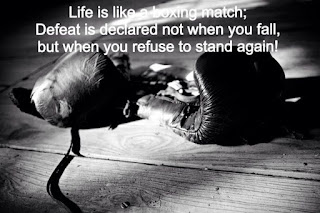 I like boxing, especially heavy weight boxing.
When I came across the picture above I liked it immediately and felt it is right for this article because the quote is just apt for this topic I thought to write on.

Life is like boxing in many ways, more so when you consider what life is about from a philosophical and spiritual perspective.
In life, you don't automatically get what you deserve. You get what you fight for.
Life gives to you what you negotiate for.
In life you negotiate by 'fighting' for what you want.

Boxing is a fight, it is a fight of two contenders who are contesting for the same glory, the same honor, the same position, the same belt!
The aim of each boxer is to emerge victorious, to out box, out shine, or be preferred over his opponent.
In life we go for job interviews.
When we go for job interviews our aim is to be victorious at the interview, to outshine, do better or hopefully be preferred or favored over other candidates who want the same job.
When we liken each interview candidate to boxing gladiators we see that they are in a 'fight' too but the way they fight is just different.
While boxers fight with their fists by throwing punches in a ring, interview candidates 'fight' by highlighting their skills, experience and qualifications.

Individuals and organizations 'fight' or compete for for the same contracts in the area of commerce and business.
From every type of sport, to games, quiz shows and even politics we see a 'fight' to win and be dominant across the board.

With the sport of boxing there can be casualties, there have been boxers who who went into comas after a fight or a punch. There have been boxers who went into the ring with confidence and a certain pride but were taken out of the ring on stretchers.
Life can also be like that.
There have been individuals who unfortunately ended up casualties of life.
They started out great in life with great prospects and opportunities, but one 'blow' on life's journey and everything changed negatively for them.
In boxing, one blow or punch can change the dynamics of a game.
In life one wrong decision, one wrong advice or mistake can change the direction and dynamic of life for anyone.
In boxing every boxer has a game plan until they get into the boxing ring.
In life, many people feel they have it all planned out and know what they will do to end they way they want until they realize life's journey is not exactly ABC.

The scripture also talks about the cloud of witnesses.
The cloud of witnesses are saints who have gone to be with the Lord. They watch from the grand stands of heaven as the saints of God here on earth run the race and fight in the contest of life.
It's kind of like the 90,000 audience in the stadium who watched the Anthony Joshua and Vladimir Klitchko fight as well as the huge crowds from other boxing matches.
With boxing, each person in the audience has a boxer he supports and hopes will win the fight.
Spiritually we have our 'fans' to, our supporters group from the spirit realm in the form of angels and people of God's household who have gone to be with the Lord.
As we fight the fight of faith here on earth we have fans who are cheering us on from the grand stands of heaven. Our heavenly audience!

In boxing, it helps the boxer when he has great punching power.
In the spirit realm our faith is our punching power!
In life faith will take you far.

In Psalm 118:34 and Psalm 144:1, scripture talks about God training hands for war, fingers for battle and arms to bend a bow of bronze. The arm, clenched fingers and hands are the major tools of boxing!
God is the one who gives strength and victory just as a champion boxer gets the victory over his opponent.

Posted by Olutosin Ogunkolade at 06:13