The Fine Art Of Boxing 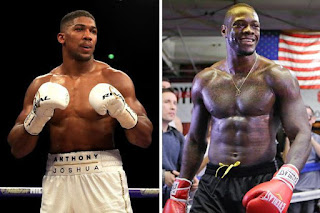 For those of us who are boxing enthusiasts the Anthony Joshua and Deontay Wilder unification showdown which will determine which boxer is the undisputed world heavy weight champion is the match to look out for this year 2018.
It's our hope the boxing match will be this year and that the Joshua and Wilder camps will come to a contractual agreement soon, it will be a real show down!
May the better man win, may the 'true king lion of the jungle' emerge.
I'm an Anthony Joshua fan.
He is young, well built, tough, has knock out punches and has proved himself even at Olympic level.
He has quite a clean image, he has kept a level head since he took on boxing, and he relates well with his fans and admirers.

The heavy weight division has been interesting lately and Tyson Fury's recent come back after a compulsory break of over two years makes it all the more so.
Tyson Fury is tall, hilarious, has a strong presence, and a unique ability to dominate fights. He is also quite well liked and remains undefeated, he has been at the game of boxing since he was a kid.
He remains lineal heavy weight champion and he has a hunger to get his belts back. A big guy with a long reach, he can be hard to hit when confronted in the boxing ring since he knows how to use his hands well and dodge punches.
He calls this the fine art of boxing or the sweet science of boxing.
The fine art of boxing or the sweet science of boxing is the skill that involves hitting and not getting hit, punishing your opponent and not getting punished or hurting your opponent and not getting hurt yourself.

The fine art of boxing is a skill Floyd Mayweather knows all too well.
It is the secret to his 50-0 victory in a boxing career that brought him fame, financial fortune and boxing longevity.
It's this skill coupled with experience Tyson Fury is banking on to defeat other boxing heavy weights particularly Deontay Wilder and Anthony Joshua.
Whether he will achieve this feat is yet to be seen.
Deontay Wilder is a hard hitter who has 'heart' and doesn't give up easily and has amassed a 40-0 victory in a career that has spanned over twelve years with 39 knock outs.
Anthony Joshua we all know is no push over, he has so far been a herculean task for other boxers to defeat.
Whether Anthony Joshua will defeat Deontay Wilder, I do not know. It is extremely hard to predict.
But it's my hope Anthony Joshua defeats Deontay Wilder and I do not doubt he has what it takes to do so.

Amir Khan is back, Saul Alvarez Canelo is back soon , Dillian White is back on track in the heavy weight division, Luiz Ortiz is a rugged fighter who has picked himself up after his loss to Deontay Wilder.
There is a lot to see and expect in the boxing world.

I watch eagerly but patiently to see the direction boxing particularly the heavy weight division will go.
But whatever is ahead, it is looking exciting!

Posted by Olutosin Ogunkolade at 06:07 No comments: