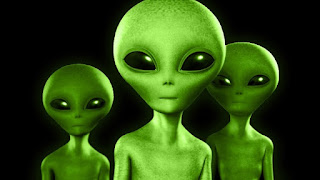 In the last thirty years or so, there has been an increase of interest in finding out whether extra terrestrial creatures exist.
This interest and field of research has captured the minds of my generation.
My reasons for believing this is not far fetched. There are many films about aliens or extraterrestrial creatures out there - Star Wars, Men In Black, Aliens, Predator, Cowboys and Aliens, E.T, Independence Day, Alien Abduction, The Alien Factor to name a few.
Some of our children's cartoons are full of 'aliens' and alien like creatures, and many of our comic superheroes are aliens from another planet.
We also have people who have dedicated their lives to researching and observing the phenomenon of Unidentified Flying Objects (U.F.O)'s.
U.F.O's are believed to be aliens who come to earth from out of space with space ships or "flying saucers". There are people who've claimed to see U.F.O's and there are others who claim to have been abducted by them and brought back. They have stories to tell.
It is believed they are studying us (the human race) and perhaps taking DNA from those who were abducted.
In many circles it is believed that aliens walk among us in human form.
Such aliens must be shape shifters.
They live among us, marry, tend to be very intelligent and take up high flying jobs among us.
I recently watched a video clip about a man talking about a woman he knows in the United States. The husband of the woman in his story is an alien according to the wife. When her husband is upset he shape shifts around his face and when he is aroused he morphs.
The man telling the story claims to have been abducted by aliens a number of times himself.
He is free from such experiences right now and seems very knowledgeable about this matter.
These happenings bring about the question - do aliens exist?

The story of the days of Noah comes to mind, when fallen angels (Nephilims) came to earth and married women because they found them attractive.
I believe these Nephilim's didn't appear on earth with any kind of angelic or celestial countenance when they won the women of the earth over.
They were most likely shape shifters who took on the form of human men. Handsome, charming, human men.
Angels are not created to marry human women.
Jesus Christ who is Lord over angels told us angels neither marry or are given in marriage.
What those angels did was illegal and it attracted God's rebuke, God's judgement!
God punished them by putting them in a compartment beneath the earth called Tartarus where they are held down by chains.
We find from this story of the days of Noah in Genesis 6 that angels can take on human forms, live on the earth, find women attractive, and marry.
A fallen angel that comes to earth to live or marry is an alien.
The earth has not been given to angels but to men. Earth is the home of humanity.
Some sects of Christianity believe in the notion of spirit wives or spirit husbands. It's a school of thought that holds to the view that a spirit entity can have children with a human woman or man.
While there is some truth to this, I do not accept the spirit wive or husband doctrine but believe unclean spirits attach themselves to people and seek to function in our lives in illegal ways.


There are different schools of thought with regards to aliens.
There are people who believe aliens are a figment of the imagination, at best they are fiction.
There are other people who believe aliens are watchmen over human beings, the guardians and protector of man.
Some other people believe aliens are not 'friends' of humanity but enemies who will one day wipe out the human race and take over our earth.
There are loads of conspiracy theories out there and it's worth knowing the truth.
I'm a Christian, a follower of Jesus the Christ.
I hold to the scriptural view.
I believe aliens exist.
I do not believe they are creatures living in other planets who study humanity.
I believe they taken on forms and they are the fallen ones God's people are up against spiritually.
I believe they are fallen angels, sinister spirits who do the bidding of their master - the devil.
They make themselves seen occasionally as we are in times where there is a strategy in place to sensitize us to their presence.
Posted by Olutosin Ogunkolade at 03:34 1 comment: