We "must" be Born Again- BORN FROM ABOVE

http://www.youtube.com/v/xNZE6KzyGPA?version=3&autohide=1&feature=share&autoplay=1&autohide=1&attribution_tag=0YVYMcrJBH6-kJfSEXZ9Cw&showinfo=1
Posted by Olutosin Ogunkolade at 02:42 No comments: 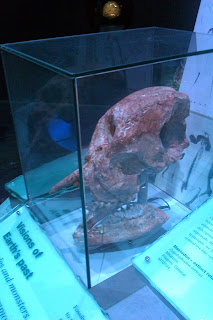 Giants once walked the face of this earth, I know this to be true because the Bible says so.
In Genesis 6 we are told of a race of giants who were the mighty men of their day, they were evil and were eventually wiped out by a miraculous flood during the days of Noah.

Archaeology also shows us evidence of this fact.
There are bone fossils, skulls and skeletal structures pieced together that show an evidence of men who were giants that once lived on the face of this earth.
Men as tall as 20 feet, 19 feet and various heights from 8 feet and above.
Giants are not just some fictional beings created to tickle our imagination and curiousity.
The picture above is a picture I took yesterday at the Natural History Museum in South Kensington London.
It is a skull of one of the giants that lived from ancient times.
That skull is not the skull of an ordinary human being. It is about 5 times the size of a normal human skull.
This proves beyond a shadow of doubt that giants have existed here on earth in different parts of the world.
The most famous giant in history is probably Goliath, the giant David the shepherd boy killed, and according to the Biblical account he was about 9 feet and six inches tall.

L.A Marzulli an archaeologist and Nephilim researcher, has loads of archaeological evidence of technologies, discovered cities and civilizations that these giants he calls Nephilims lived in and used. Technologies that were beyond their time, and stone masonry and architecture that was not found anywhere else except in the regions where these giants lived.
The word Nephilim is a Hebrew word for 'fallen ones'.
It is believed and I believe it too that these giants are children of the fallen angels cast out of heaven, who took wives among the daughters of men according to Genesis 6.
How else could they have come about?

There are tales and stories, even in children's books of one eyed giants. Well I believe they existed at some point. Some of the giants that were wiped out during Noah's flood could have been one eyed. They are called cyclops.
Some of these giants may have been handsome and charming, these became the inspiration for many of the Greek myths about Achilles, Zeus, Hercules, Apollo and Norse mythology about Odin, Thor and many of those heroic stories that fascinate us today.
But what I do know is that none of them were good though they had super human abilities and strength. In other words they were not heroes but were evil.
Why would God wiped them out with a flood if they were heroic and good?
Their source was evil and they were an evil bunch. They were a weak attempt by Satan to create his own type of men and humanity.
They were Satan's weak attempt to to infuse divinty and humanity together like God would successfully do through Jesus.
These giants came about as a result of the evil one's desperate attempt to corrupt God's human race which the evil one has always been jealous of.
There have been various accounts of giants in history, Gog and Magog, the Anakins, the Philistines, the King of Bashan e.t.c
Angels and humans are not designed to come together in sexual union.
When this happened, these hybrids called Nephilims or Repahim came into existence.
Steve Quayle has done extensive research on giants through history in different parts of the world, check out his website: www.genesis6giants.com

Posted by Olutosin Ogunkolade at 07:57 No comments: