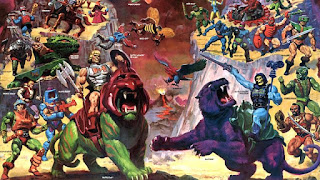 Growing up I was the type of kid who liked his entertainment.
Though I was reserved I liked my television programs.
As a grown man I still do.
I'll settle for an interesting movie at home any day, or go to the cinema if I have good company to go with. It's my major way of relaxing.

I remember watching children's cartoons like Jayce and the wheeled warriors, Mask, Transformers, Esteban and the city of Gold, Judo boy, and Belle and Sebastian.
My siblings and I also used to watch Masters Of The Universe. We found the characters interesting, the macho looking male heroes, the fights, the story lines and the adventures were captivating for our young minds. Not to mention the strength of He-Man, "the strongest man in the universe"
How no one knows in that cartoon world that the lazy prince Adams is He-man despite their resemblance and the similarity of their tigers baffled me.

There were many children's programs and cartoons that were informative, educative and entertaining in what seemed to be more innocent times with children programs.
Years have passed by, I have grown and I have since developed spiritually.
I have come to realize the enemy is after souls and he even devices ways to infiltrate the souls of humanity even from a young age.
Looking back I realize a few programs are not as innocent as they seemed and they had subtle bits and representations of witchcraft in them.

Consider Masters Of The Universe for instance.
He-Man gets his transformational powers from a castle- castle gray skull.
The skull is not a positive representation but an evil one which is a popular symbol of the occult and dark side.
Castle gray skull is a mysterious looking, dark, isolated castle with something of a baboon or gorilla looking entrance with its mouth wide open revealing fangs.
You have to walk through such a front entrance to get into her.
This is kind of symbolic of walking into evil, into darkness or death!
To think that toys of castle gray skull where made, parents bought them for their children and kept them in their homes.
Within castle gray skull lives a beautiful woman known as the sorcerer who sits on a throne and has an outfit on that has feathers, kind of like a bird.
She has the power to turn into an eagle or hawk.
She's He-Man's god/goddess and the one He-Man calls out to for empowerment and transformation.

In other words, He-Man is empowered by a witch!
It is a subtle way of saying witchcraft is the strongest power in the universe because that's the source of the main heroes character who is regarded as the strongest man in the universe.
Masters Of The Universe promotes a lot of magic, witchcraft, and new age beliefs.
This was in the 80's.

Fast forward to the 2000's.
There are many spiritual teachings and spiritual gurus about with their new age teachings, selling books and making a name for themselves.
Some of them are probably witches, wizards and warlocks.
Their emphasis is usually on the universe, not on God the creator, the person.
While I believe God created the universe and sets laws in place that control the universe we should not acknowledge the universe as the giver over God the person.
While there is truth that the universe can deliver to us because the universe is created for man and not man for the universe we should not worship the universe because the universe is God's creation.
The cosmic laws in the universe is put in place to serve man.
It's man's responsibility to discover those laws and make them work for him for it is to the glory of God to conceal a matter but to the honor of kings to search them out.
Universal laws and cosmic laws which many new age teachers are not giving God the creator credit for is not known or being used by the church. We should, it is an aspect of our dominion!
Unfortunately, the powers/laws of the universe are being manipulated and used by the children of this world who are wiser than the children of light in their own generation.

Truly, those with witchcraft powers have set themselves up deceitfully and falsely to be the masters of the universe.

Posted by Olutosin Ogunkolade at 11:50 3 comments: