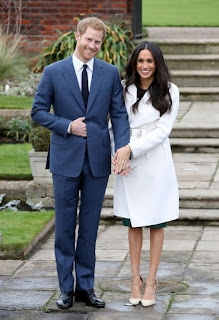 There's another royal wedding coming up. Nice!
It is an exciting time for the royal family.
Prince Charles has been made the head of the common wealth, there's a new royal baby and Prince Harry is getting married to Ms Meghan Markle.

It's almost seven years ago I wrote an article on this blog about Prince William and his wife Kate Middleton, they got married in April of the year 2011.
It's nice to see the royal couple have become parents of three children in the last seven years. While they celebrated a seventh year anniversary in April of this year 2018, they also welcomed the birth of a new baby boy into the World.
A congratulations is really in order.


Weddings are usually exciting for the couples involved and guests that are present.
So it's an exciting time for  Prince Harry and his bride.
At this point I am wishing them the best for the future and a successful wedding day, it's my prayer and hope that their marriage will be a greater and bigger success than their wedding.
This wedding is an event the entire nation is happy about and rightly so.
I'm happy for Prince Harry and his bride, they come across as an authentic and nice couple.

A unique wedding it will be in some respects, perhaps because of the uniqueness of the individuals getting married.
As the eyes of the world and the United Kingdom will be on the event and royal couple on Saturday the 19th March 2018, I look forward to relaxing, making myself comfortable with family, following it on television and enjoying day.
Blessed be the day!
Posted by Olutosin Ogunkolade at 14:00